South Korea and its History as a Sports Powerhouse (Olympic)

South Korea is a small country.
Its population is about 50 million and
its land mass ranks 109th in the world.
Despite its small population and territory,
South Korea has a strong economy that ranks
between 9th and 10th in the world.
South Korea is also the country of the first Asian female president.
Some of the nation's companies such as
Samsung, LG, and Hyundai Motor Company are multinational brands.
In addition, the nation's sports level is outstanding.

South Korean athletes are expected to perform well in the
Rio de Janeiro Olympics this year.
(South Korea is the farthest country from Brazil). 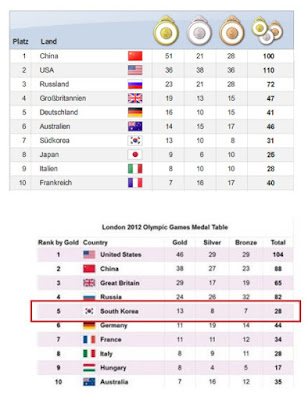 South Korea ranked 7th and 5th in 2008 Beijing Olympics and
2012 London Olympics respectively.
South Korea's land mass may be
incomparable to those of Olympics host countries,
but its performances in these sports events are on par
with countries such as Brazil, Argentina, China, etc.