The posters below were created by a
Korean public relations specialist
in order to advertise Korean food to foreigners.
Each poster promotes different Korean food or
drink and stars a popular Korean celebrity. 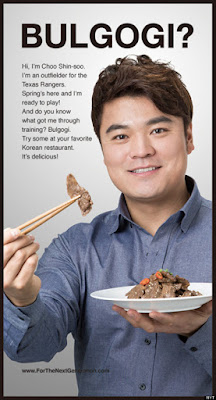 Bulgogi.
This is grilled marinated beef or pork. 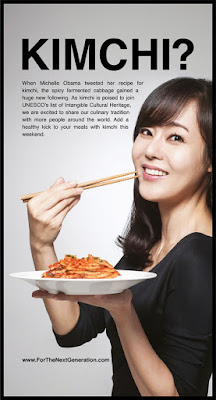 Kimchi.
This is a fermented side dish made of cabbage, chili powder,
and various other seasonings such as garlic, oyster sauce, etc.
It is the most widely known Korean dish. 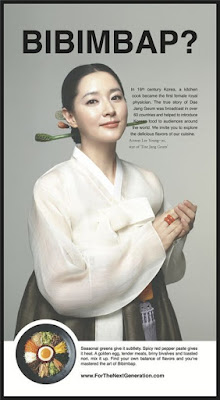 Bibim-bap.
This dish has warm white rice, seasoned vegetables, and
soybean paste or chili pepper paste.
You stir all these together
before eating. 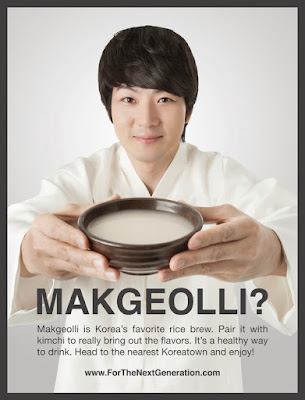 Makgeolli.
It is a traditional Korean alcohol made of fermented rice.

Even if you don't remember the
celebrities in these posters,
or have never even seen these posters,
you should definitely try the dishes listed above if you come
to Korea. They are very delicious.

Japan's Rising Sun Flag and
Germany's Swastika are equivalent --
both represent the atrocities that these countries
committed during World War Two.

Germans are ashamed of the swastika and do not use it:
they are aware of what the Nazis committed.
However, Japanese are not ashamed of using the Rising Sun Flag. 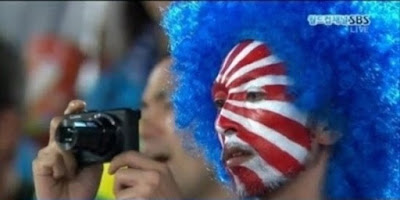 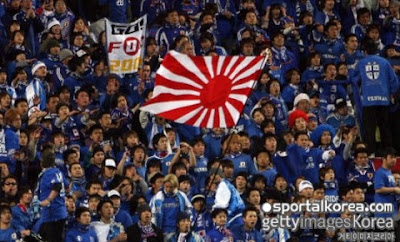 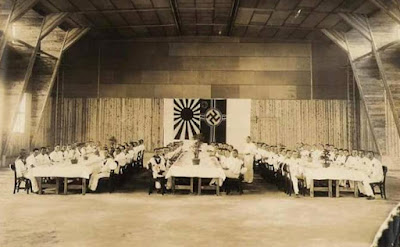 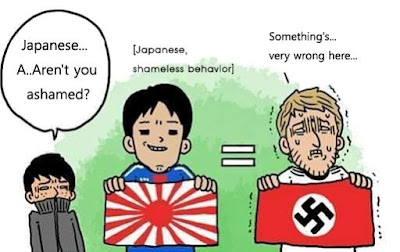 Please point this out:
The Rising Sung Flag is the Asian equivalent of the Swastika.
It symbolizes Japan's wartime crimes,
so Japanese people should not use the flag.
Do they not know what the flag represents?

Email ThisBlogThis!Share to TwitterShare to FacebookShare to Pinterest
Tags Swastika

Since Full Korea was launched in January of 2010,
it has introduced South Korea
to countless foreigners all over the world.
Since the inception of this site,
67,328 people from the United States,
11,873 from Israel, 11,650 from France,
10,000 from Ukraine,  and 5,000 from Germany
have accessed the website.

The number of people who visited the site
from Russia, China, Canada, Indonesia, and other
countries totals 10,000. 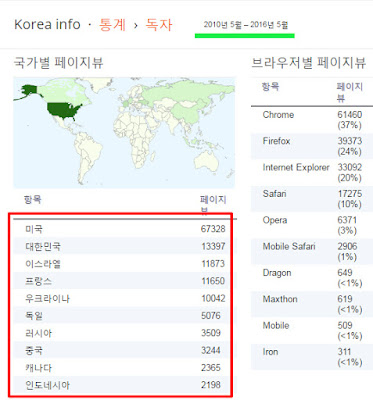 Despite the small number of visitors,
Full Korea has been informing foreigners about South Korea
for the past six years. That fact is something I am proud of.

Global Response to the Oxy Incident

This product killed 146 people, who were mostly pregnant women. According to investigations led by the South Korean government, 80.3% of the research subjects (404 people) had used the Oxy product. The harm done by Oxy must be told to the whole world.

The head of Oxy is apologizing to the South Korean public. However, Oxy products had caused fatalities in 2011. It took five years for the head of Oxy to apologize. And why did it take five years for this tragedy to gain attention from the media? It is truly frustrating and sad.
this file name is "oxy-out.jpg" Did you not purchase Oxy products during those five years? Reckitt Benckiser is a global brand. The fatalities caused by Oxy is not South Korea's problem alone.

Do you have Reckitt Benckiser or Oxy products in your house? The South Korean society is trying to increase global awareness of this Oxy incident.


Products made by Reckitt Benckiser Korea,
better known as Oxy,
killed hundreds of South Korean citizens.
Oxy had advertised and sold humidifier sterilizers, claiming that
the disinfectants were safe.
However, 239 consumers died from the products.

The South Korean public is
boycotting Oxy consumer goods.
Some families of victims are visiting Reckitt Benckiser
headquarters in Britain and protesting there, thereby
attracting attention from media worldwide. 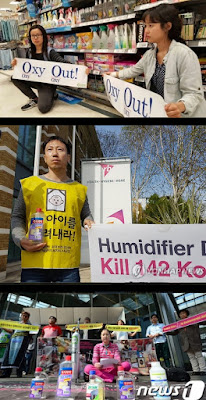 Reckitt Benckiser (Oxy) is a multinational brand.
Its South Korean unit has given a public apology that is
too belated. The compensations that it is offering to the victims
and their families is ridiculously small.
The world should turn its back on the company.
Oxy products used in your houses can kill you and your loved ones.

Visiting Gangnam: Information on Places to Stay and Hang Out


Psy's song called Gangnam Style was released in
2012 and took the world by storm.
The popularity of this song can be
compared to that of Macarena by Los Del Rio.
Gangnam Style will probably ring in people's heads for decades.
Korean pop music is often referred to as K-pop,
and has been popular in Asia and Latin America.
Psy's Gangnam Style is inducing tourists from
all over the world to visit Gangnam. 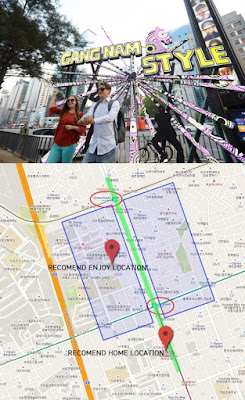 Gangnam is a good place to hang out.
It is filled with eateries, stores, and other facilities.
But the number of facilities and tourists can make
Gangnam a little too hectic and loud.
There are some quiet neighborhoods and streets that
are only three minutes away by walk from Gangnam.
These places are also good spots to hang out
and enjoy the night scene.

You can check out the locations in the image above.
You will find more details about the locations
and prices of restaurants,
shopping and lodging facilities, etc through airbnb:
https://www.airbnb.co.kr/rooms/11874155